The Story of Cross~Rhodes in Evanston 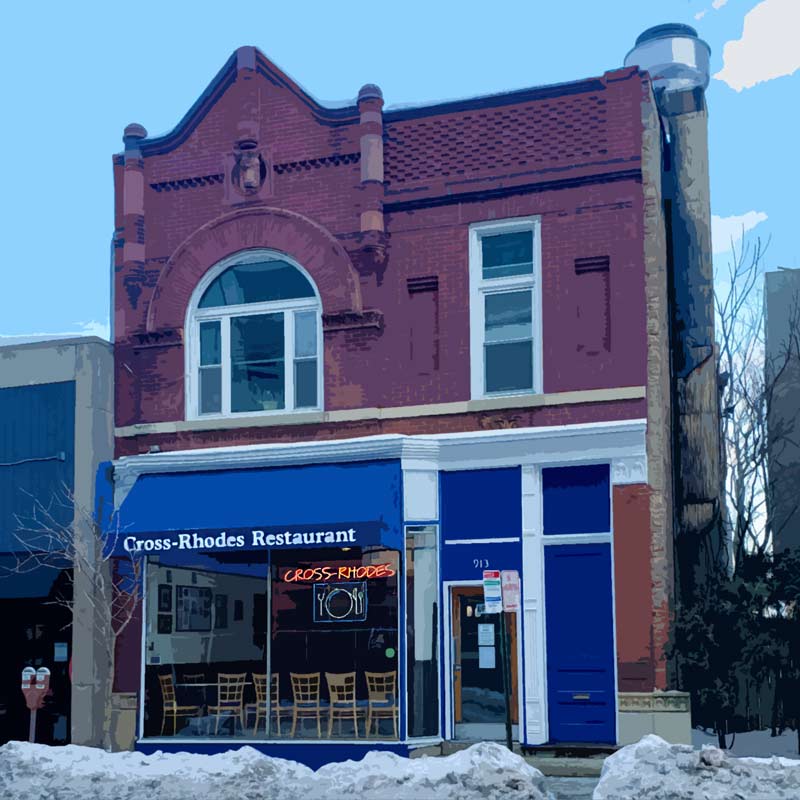 In December of 1984, Chicago entrepreneur Jeff Russell fulfilled a lifelong dream and opened his own restaurant in Evanston, Illinois.

The inspiration for CROSS-RHODES came just two years prior when, on a vacation in the small town of Avia in the Southern Peloponnese of Greece, Jeff met his future wife, Georgia. They were married in Kalamata, Greece in 1982.

Together, they returned to the United States, along with a plan to bring a little bit of Greece home with them.

Shortly thereafter, their daughter, Maria, was born followed by the opening of Cross-Rhodes restaurant at 913 Chicago Avenue in Evanston.

The restaurant’s location was fitting: one of Evanston’s longest-standing buildings originally built in 1895 as a meat packing plant. In the following decades, Cross-Rhodes would become a longstanding Evanston restaurant institution all its own.

The Cross Rhodes’ menu –a delectable “cross” between Greek and American cuisines– immediately attracted fiercely loyal customers not only from the Chicago area, but eventually throughout the country.

In 1999, as a sophomore in high school, Maria started working at her dad’s restaurant.

During a time when restaurant business was slower and tip-dependent employees were suffering, Jeff refused to cut any employee’s schedule because of the 20 or so children who were dependent on income from the restaurant. He was much more concerned about keeping his employees at a living wage than making a profit. Because of his commitment to employees and the Evanston community, in 2011, Jeff was awarded the prestigious “Service Above Self Lighthouse Rotary Award.”

Sadly, the Cross-Rhodes family lost Jeff in 2012. Today, however, his memory and his restaurant continues to live on stronger than ever. Jeff’s daughter, Maria, proudly carries on her father’s recipe for fun, family and the time-honored authentic flavors that go along with it.